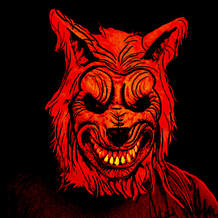 Well before I ever started playing any instruments, I became fascinated with the impact instrumental and original score music can have.
​
This fascination began while watching wrestling in the mid 90's. I was just as excited about hearing the wrestlers' ring entrance theme music, made specifically for their character, as I was for the actual matches.

I used my Home Alone, Talk Boy tape recorder to record the music right off of the TV, so I could listen later. Crowd noise and commentary almost totally obscured the music, but I still wore that tape out.

Beyond wrestling theme music, I developed an admiration for the original scores in all my favorite movies (Beetlejuice, Men In Black, Ghostbusters, Nightmare On Elm Street), TV shows (X-Files, Are You Afraid Of The Dark?, Unsolved Mysteries), and video games (Zombies Ate My Neighbors, Banjo-Kazooie, Donkey Kong Country). To me, music had the most impact in the sci-fi, horror, and mystery genres. It drew me in.

I started playing guitar in high school, but I really wanted to play in a band. Because everyone else played guitar I bought a bass on Ebay, so I was guaranteed to be included in a band as a bass player.

WaterPipes was formed with some high school buddies. We had a great time playing mostly hard rock and weird, grungy music. We went separate ways after high school and eventually ended the band.

I co-founded Tropidelic with a college dorm mate. In the early days, the 2 of us played all the instruments for our tracks in our dorm room at Kent State University. We'd swap playing guitar, bass, keyboards, drum programming, everything. This was really my first experience with hands-on multi-track recording, and is where I really developed a love for the production component of recording music.

We played a mix of reggae, alternative, and hip hop. During this time is when I began my love for surf guitar music. After a few years of playing with Tropidelic, it was time to part ways.

The more we progressed, the more I realized I had more fun in the music creation process than I did playing shows. Hanging out in a studio, whether it be a "real" studio or an in-home studio, was more appealing.

Now working on my own, I have continued to study and improve upon my skills in audio production. I finally started making the sounds and the instrumentals I've always wanted to make. No restrictions.

I continued to gain experience, but I never did lose any interest in great soundtracks and original scores. My once budding interest in surf guitar has grown into a full-on obsession.

I have combined those ideas to create scores and soundtrack instrumental music for any project needing my special blend of horror, sci-fi, and surf music.
Professional Background
Instruments
Musical Influences
Q&A
Q: What made you realize you want to make soundtrack music?
A: I may not have known it at the time, but I have to say it was from playing Zombies Ate My Neighbors on SNES when I was about 10 years old. The track "Chainsaw Hedgemaze Mayhem" in particular blew my mind. Its awesome to listen to on its own, but the way the music so perfectly compliments and enhances the imagery and gameplay has always stuck with me.

Q: What would be your dream project?
A: I would love to be involved in a super cool horror video game with unique graphics. Ideally, it would contain oddly colorful characters against very dark and ominous backgrounds and landscapes.There would be different terrifying rooms, hallways, creepy basements, along with outdoor night time settings. Of course, there would be a number of creatures, ghosts, and monsters. I would make some crazy and scary music for it spanning over several genres, each track custom made for every scene, character, and level in the game.

Q: What are your top 3 original scores in movies?
A: This is where Danny Elfman really shines for me. I could just pick 3 of his, but I'll mix it up a little bit at least. His work in Beetlejuice and Men In Black are great examples how the music can be so memorable and fit within the universe so perfectly. Then of course there's Hans Zimmer. His work in Interstellar is just ridiculous. Well, all of his work is amazing, but Interstellar is a total home run.

Q: What 5 albums are your biggest influence that are NOT original scores and soundtracks?
A: I could name like a billion of them but I'll stick to 5 that have influenced me in different ways. No particular order:
311 - Transistor
Beatles - Sgt. Pepper's Lonely Hearts Club Band
Dick Dale - Greatest Hits 1961-1976
Dr. Dre - The Chronic
Messer Chups - Spooky Hook

Q: What is your goal?
A: I'll sum it up with a story. When I was little, the TV show "Unsolved Mysteries" used to scare the shit out of me. But it wasn't the stories and the re-enactments. It was the opening credit theme music. Something about the combination of Robert Stack's scary voice narrating over the strange beat spooked me. It scared me so much that as soon as the music came on, I would hide my head under a blanket until it ended. So what is my goal? That. I want to make music so impactful that you just might have to hide under a blanket in fear based on the sounds alone.